The PolarPro GoPro Hero4 Coloured Filter 6 Pack Frame2.0 Production set (No Housing) is the ultimate filter set for the GoPro Hero4, Hero 3+, and Hero3 cameras. The filters are designed to shoot through the least amount of glass as possible, mounting directly to the GoPro lens (only compatible with naked GoPro, Frame housing, or most gimbals). This set is geared for the production world, where slower shutter speeds are needed to either match other cameras, or using a slower shutter speed to give videos a smooth, cinematic look. This filer set gives you full control over the GoPro’s shutter speed allowing you to reduce it by 1 to 5 f-stops with the included filters.
The Frame2.0 Professional set will also help pilots flying the 3DR Solo or other GoPro Drones. The Polarizer filters help eliminate glare and reflections bouncing off the ground, while the ND filters help reduce shutter speed and in turn help reduce the jello effect (rolling shutter). These ultra-light filters are perfect for using with gimbals, and do not require any counter-balancing.

Included in the set are:
Polarizer Filter (CP) (6.06 grams): The polarizer filter is a great all around filter, it will reduce glare, improve colour saturation, and improve contrast. It is also a great filter for aerial filming making clouds pop, and brining colours to life.
Neutral Density 3 Stop (ND8) (5.38 grams): The ND8 filter is used for reducing the shutter speed by 3 stops. For flying, generally the ND8 filter will be enough to reduce jello in partly cloudy conditions.
Neutral Density 4 Stop (ND16) (5.23 grams): The ND16 filter will reduce the GoPro’s shutter speed by 4 f-stops. For the 3DR Solo and GoPro Drones, usually this will take care of jello during sunny days. When the GoPro is firing at super high shutter speeds (1/2000th) this will knock it down and smooth out the video nicely.
Neutral Density 5 Stop (ND32) (4.76 grams): The ND32 filter knocks the GoPro’s shutter speed down by 5 stops. This is a very dark ND filter used for extremely bright conditions, or getting creative with very slow shutter shots. For Flying, you will most likely only want to fly this filter on very very bright days.
Neutral Density 3 Stop Polarizer (ND8/PL) (5.93 grams): This is a very unique filter designed to reduce the shutter speed by 3 stops as well as help remove glare from videos. This filter is a great all around filter for making colours pop and slowing shutter speed for a great end result.
Neutral Density 4 Stop Polarizer (ND16/PL) (6.72 grams): This filter knocks the shutter speed down by 4 stops and also reduces reflections. We use this filter while shooting near water or snow. Also used in production for slowing shutter speed and removing glare. 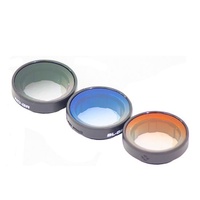 6 in 1 Charger Base with Plate for AA,AAA