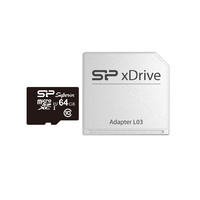 The xDrive Series is a line of expansion cards for MacBooks that offer a no-more-boundaries experience for users to transfer and backup large files through high capabilities. The xDrive offers an impressively large space to store up to 4,800 8-megapixel high resolution photos, 33,000 MP3 songs or 28 hours of Full HD (9Mbps) video.
xDrive Series runs at incredibly fast transfer speeds of up to 90 MB/s to use the power of MacBook without any interruption. With the xDrive, delays are now virtually non-existant no matter if your task is graphic editing, or dealing with large media file backups.
The xDrive Series memory cards are especially tailored with certain dimensions to be exactly fitted in MacBook Air and Macbook Pro while keeping in with the sleek design of the laptop. Displaying a compact and seamless appearance.

L03 SP xDrive is compatible with:

L03 SP xDrive is compatible with: